Soup of the evening, beautiful soup

I was starting to feel a little under the weather last weekend, so I decided to spend Saturday afternoon simmering up a restorative chicken broth. It turned out so rich and delicious that now I want to spend every Saturday making soup!

I started out by heating some olive oil in a large stockpot and searing a pound and a half of chicken backs. Once they were nice and golden brown, I added in two onions, cut in half, and half a head of celery and a large handful of carrots, roughly chopped, and let them brown up a little bit. Then I added enough water to cover everything, a couple of bay leaves and a small sprinkle of dried thyme, brought it to a boil and then turned it down to low and let it start simmering.

While the soup simmered, I roasted a whole 4 1/2 lb chicken in the oven for dinner. The other half of the celery and two more halved onions were tucked underneath the chicken. Once it was done, I removed the breasts for that night's dinner, picked the remaining meat off the carcass and set it aside, then added the chicken bones and roasted vegetables into the stock pot, adding more water to cover.

All in all, the chicken stock simmered for about six hours, until it was deeply brown and flavorful. I added a little bit of kosher salt to taste then strained the whole mess into a glass bowl, which went straight into the fridge. In the morning, I scraped the gloppy layer of fat from the top of the bowl and was left with about a gallon of lovely, rich chicken stock.

Some of it went right into this chicken and stars - and escarole! - soup. Oh man. If there's anything better than homemade chicken soup, I don't know what it is. 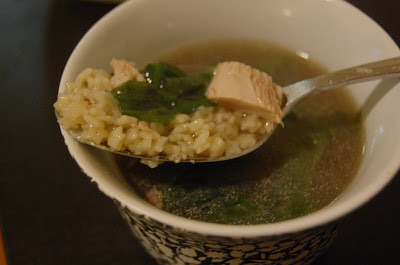 Once you have your homemade stock, this soup comes together super fast. Just heat up your broth and some of the reserved chicken, boil up a cup of tiny star-shaped pasta and then mix the cooked pasta into the broth. This week, we received a mystery green from the CSA - I originally thought it was lettuce and tried to make a salad out of it, then realized that it was way too thick and strongly flavored to be lettuce. Next guess? Escarole! Just the thing to shred into ribbons and mix into a boiling pot of soup for some extra flavor and nutrition. Yum!

After the soup was made, I took the rest of the chicken stock and froze it in ice cube trays, knowing how delicious it would make everything it touched. And I was right! It made this celeraic soup absolutely delightful. 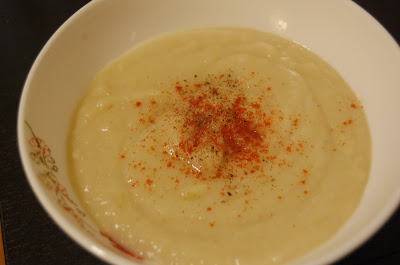 This isn't just celeraic soup, actually. It's celeraic-apple-leek-potato soup, a delicious way to use up about half of this week's CSA share in one yummy, warming pureed soup. It's crazy easy, too - just peel and chop one large knob of celeraic, two apples, one potato, one clove of garlic and a bunch of leeks, saute them in a bit of oil to get some browning action going on, then cover them in chicken stock and simmer for 30 minutes. Once everything is tender, puree the soup with an immersion blender - or in batches in a traditional blender - and adjust the seasonings, if necessary. You can also stir in a few pats of butter or a splash of cream if you're feeling indulgent, but it's really not required. I served this soup with a bit of paprika and black pepper on top, but croutons would be absolutely wonderful, if you have some around.
Posted by Blogging the Box at 12:52 PM